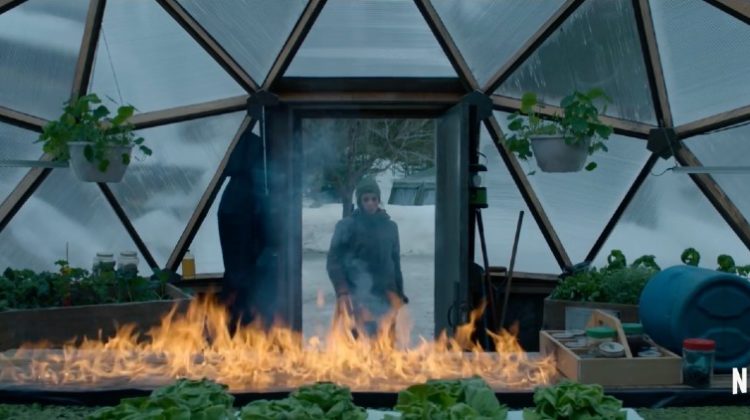 “The Decline” or “Jusqu’au declin” in French is a Netflix financed Quebec film that premiered last month at the 38th edition of Les Rendez-vous Quebéc Cinema in Montreal. To be honest, I’ve heard about it first from the Quebec Premier Francois Legault as I’m following up closely on COVID-19 updates and he brought it up in one his tweets.

What is the movie about?

“The Decline” is a thriller that follows a group of survivalists attending a training camp in Quebec’s Laurentian mountain region. The movie starts off strong when Antoine (Guillaume Laurin) wakes his young daughter in the middle of the night, tells her to get her survival kit and they take off in his Subaru. Few minutes later, he stops the car only to tell his daughter they bested their previous apocalypse-prep drill, and then head back home.

Then the father (Antoine) joins a group of survivalists at Alain (the organizer’s) residence, which spreads over 500 acres and is equipped with “ample living quarters, solar panels, stockpiled fuel, livestock, a greenhouse, wild-game snares and scattered booby traps designed to repel (or worse) any human intruders.”

The participants are then asked to complete various trainings, including handling weapons and explosives, before one of the campers’ bombs goes off while he’s holding it, killing him on the spot. That’s when everything goes downhill, where the organizer and one of the campers want to get rid of the body, while others want to call the police.

What follows is a violent hunters-vs-hunted thriller that ends unexpectedly. I will not get into the details here in order not to spoil the movie, but this part is quite brutal, and pretty much shows the unpreparedness of humans to handle each-other, let alone handle an alien invasion, pandemic (since we’re in one) or a natural disaster. Add to that, joining a random YouTuber’s survival camp to play with guns & explosives after watching his videos online is as good as an idea as stocking on toilet paper to fight the COVID pandemic 😂.

This is actually the part I loved about the movie, is that those so-called survivalists are quite interesting characters, the acting is authentic, and even though the ending was a bit disappointing, it did make sense in a way given the character’s background.

All in all, I did enjoy watching it. It was quick, action-packed and full of surprises. I wouldn’t give it more than 6.5 but it’s one of those action movies that you won’t regret watching after it’s over.